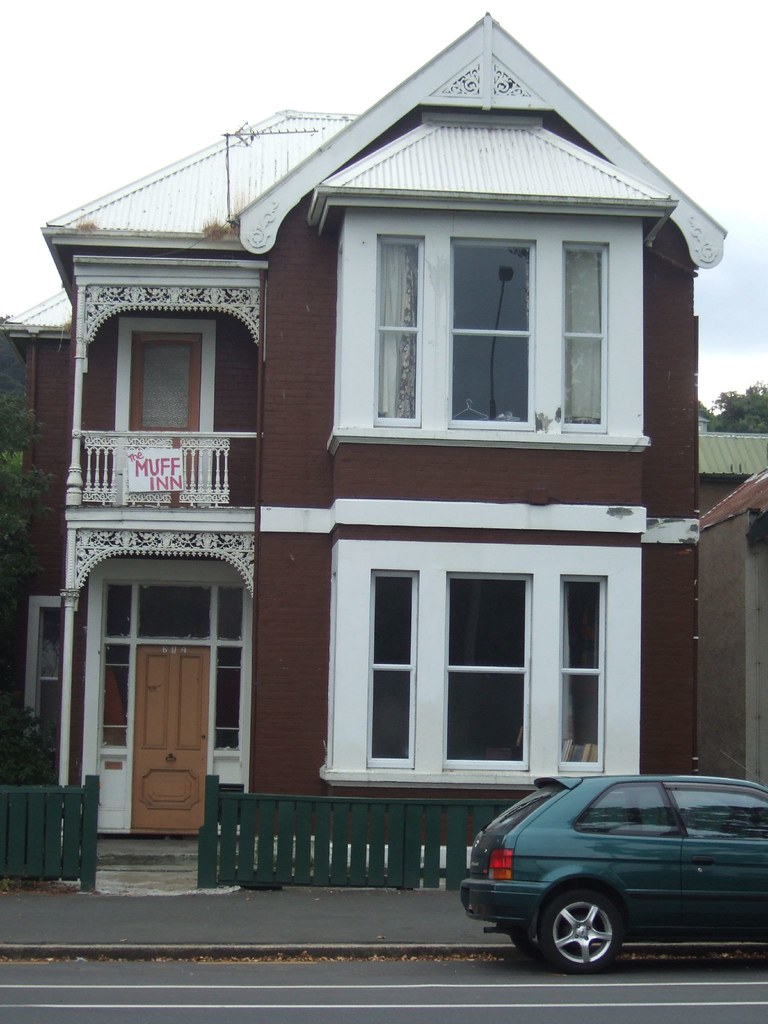 The latest in a series of Harry Potter themed flats, The Burrow is on the site of the longest lived iteration of Shrieking Shack.

The name board is painted sky blue with Potter inspired “lightning bolt” font, and is bedecked with a snitch and broomstick.

“It’s not much, but it’s home” is how Ron Weasley described his home to Harry when he first visited in The Chamber of Secrets. 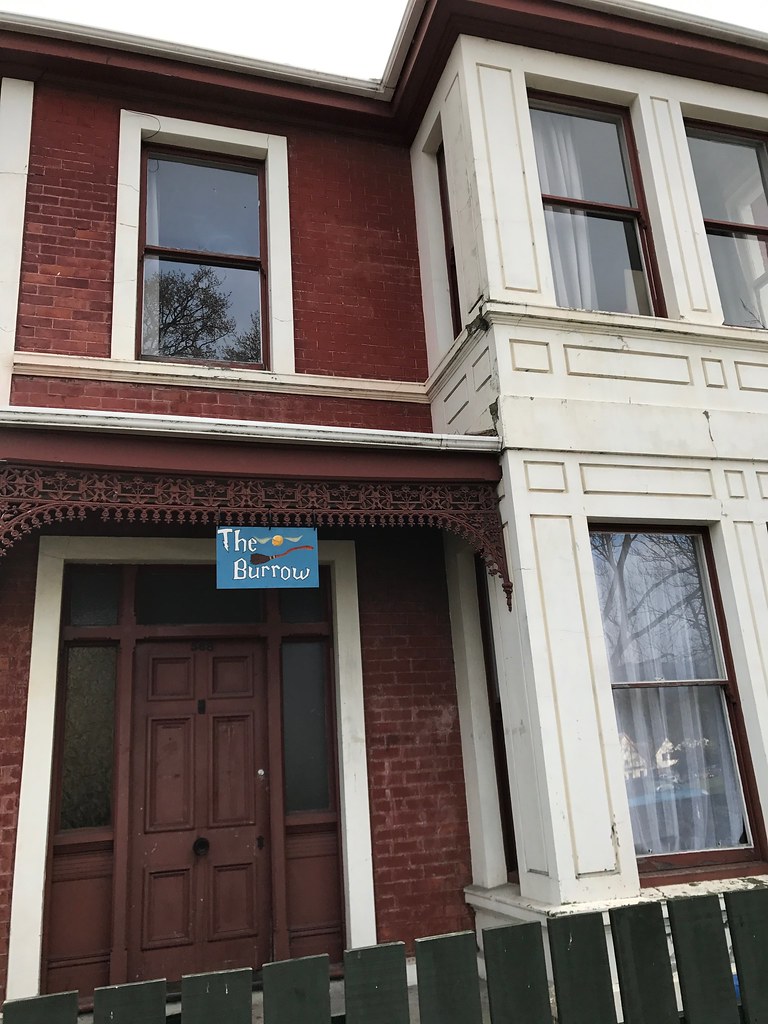 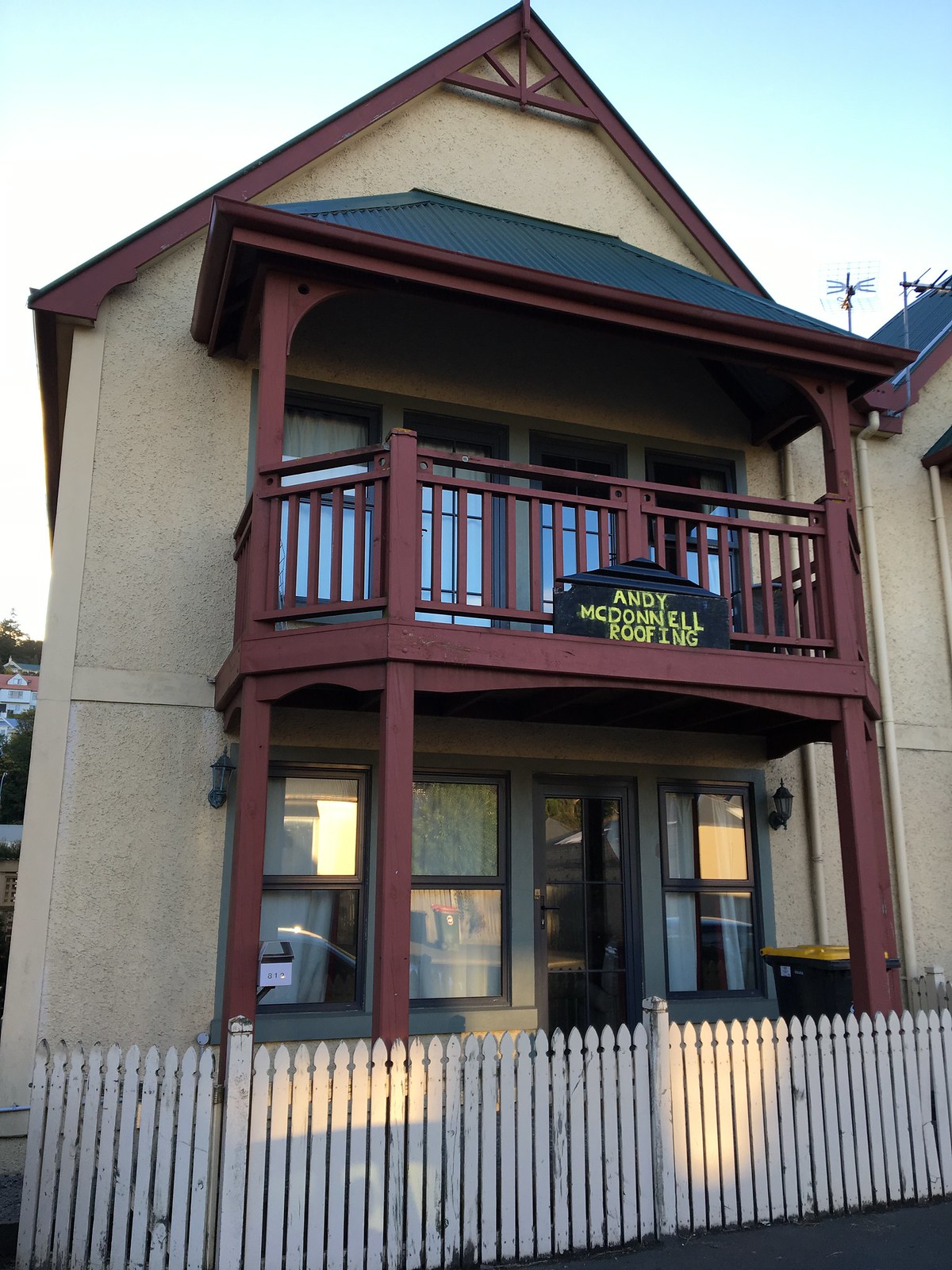 Only a short staggering distance from the Captain Cook tavern, The Stagger Inn (2007) was opposite the Otago Museum green and next door to the University Bookshop. It is currently known as Chamber of Bangerzz (2017). 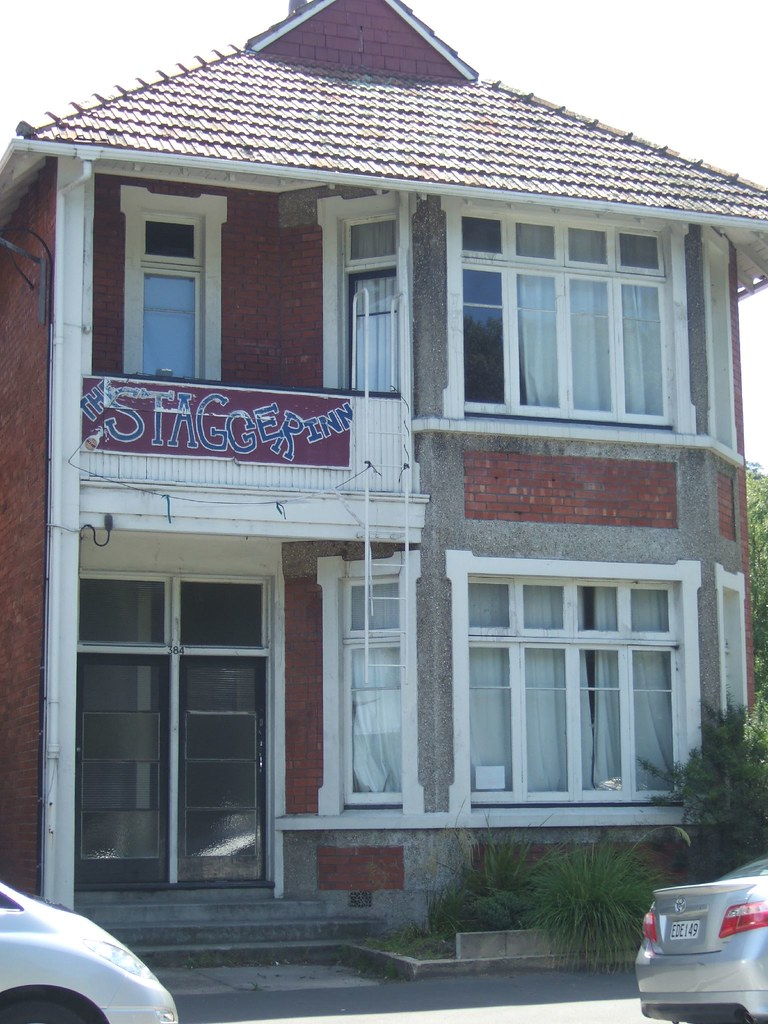 The Harry Potter series has hit a number of records in literary and film-making history. One record that is sure to be unique in the world is the influence of the series on house naming. Here in Dunedin, New Zealand there have been a number of flats that have been bestowed names with a Potteresque flavour.

Something I’ve noticed about the naming of student flats over the years is that popular culture plays a huge part in the naming, and there are examples of films and literature being a source of inspiration over the decades that flat naming has been a thing. Earlier examples are Smerch HQ (1960s), Hobbit (1970s), The Bordello (1990s) and, more recently Zeta.

The first Potter inspired flat is the Chamber of Secrets (2007) from 150 Frederick Street. All Potter fans, the sign depicting the Hogwarts crest was painted by Will. The flat won the Te Roopu Maori “Best Name or Sign” in OUSA’s 2007 House & Garden awards. The judges thought the sign on this flat was “Fucking awesome!”.  When the tenants of 2008 didn’t want the (frankly amazing) sign, the Chamber Boys took it with them.  When I met up with them the sign was hanging on their lounge room wall.

In the Harry Potter series, the Shrieking Shack was commonly known as the most haunted house in England. In Dunedin the Shrieking Shack on Great King Street received its name in 2010 from Scott Honeyfield, a Potter fan, and his flatmates. Scott told me the age and character of the house suited the name. Interestingly the house is also well known for it’s toilet under the stairs that can not accommodate persons of height. The toilet under the stairs may allude to the shitty living conditions Harry Potter experienced while living with the Dursley’s on Privet Drive. I acknowledge this may be a bit of a reach on my part.

Since 2010 the Shrieking Shack has maintained its name with periods of absence of signage. The current iteration of the sign is the third in 5 years and resembles a white on black version of the Queen Street sign seen below which utilises the Harry Potter style lightening bolt font.

Here’s a photo of the same flat from late in 2015. This sign replaced one which was stolen earlier in the year.

The Shrieking Shack on Queen Street had a short life, this rendition offers a black on white interpretation of the current sign that can be seen on the Great King Street flat (above).

In 2014 I was approached by a property developer, Tim Calder, who wanted to name a few of his flats on St David Street. After some discussion around potential ideas, he and his property manager Megan, decided on Harry Potter themed names. I visited the flats on Friday 27th November but only found one sign still in situ, Godric’s Hollow.

A shout out to the Dunedin Flat Names Project community on Facebook has connected me with people who have helped fill in some gaps in information (thank you!) and also revealed a further Potter inspired flat, the Three Broomsticks, sometimes also known as Three Broomsticks Racing. This flat is apparently on Great King Street but I’ve not yet seen the sign.

Roger recalls a disastrous cooking/decorating experience at The Shambles. If you dare, here’s a recipe for ‘dough boys’ to try. No responsibility taken if they explode, of course.

Mix with enough milk to make a light dough and form into balls.

Bring this to the boil and add the small balls of dough. Cook for 15 mins.