Check out the blog post and fab book cover for Smersh by Nicola Sinevirsky. Smersh was the name of  a flat on Cumberland Street near the current site of Landcare Research, in 1960s.

“Otago students seethed last week when Falus, a campus broadsheet, revealed that Vice Chancellor R. Williams, had ordered a male student to leave a flat he shared with three girls.”

Roger recalls a disastrous cooking/decorating experience at The Shambles. If you dare, here’s a recipe for ‘dough boys’ to try. No responsibility taken if they explode, of course.

Mix with enough milk to make a light dough and form into balls.

Bring this to the boil and add the small balls of dough. Cook for 15 mins.

Soon a 1st edition of James K. Baxter’s Small Ode on Mixed Flatting will be on my book shelf. Thank you Renaissance Books, Dunedin. Here’s an earlier post about the Caxton Press. 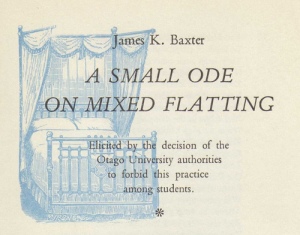 Where Scribes Bookshop is now, on the corner of Great King and St David Streets in Dunedin, there was once a notorious flat, called the Shambles. It was well known for it’s parties and as a location to go to continue drinking once the pubs had closed.

It’s not entirely clear from where the name of the flat originated: it may have been the shambolic nature of the place itself, or it may, as has been suggested by a former resident, been named for a place in Manchester of the same name.

Shambles is an old name and derives from Viking word Shamel apparently meaning ‘bench’, ‘booth’ or ‘shelf’ and the name is found in many places in the UK where there are market places.

The most famous example such a place is the Shambles in York which is allegedly mentioned in the Doomsday Book, one of the few streets that is. This would make it over 900 years old.

This is a quintessential medieval street with upper storeys of buildings stretching out across the street precariously towards each other. The street was once a flesh market (hence also being known as Flesshamel) – that is, a street of butchers. Livestock were slaughtered in the streets and it’s been suggested that it is this resulting mess that provides the word shambles with its contemporary definition. In fact the OED gives three definitions: 1) a mess or muddle, 2) a butcher’s slaughterhouse, 3) a scene of carnage.

Reports about the Shambles in Dunedin, of parties and exploding pans of golden dough boys from the 1950s and 60s, suggest the OEDs third definition may be most approprite for explaining the name of our Great King Street residence.

There are now 880 members of the Dunedin named student flats group – some new flats from the 1960s – Free Latvia, Nightmare Abbey, The Department of Slovenic Studies, and The House at Pooh Corner.

I’m really keen to hear from people fro the 1940s and 1950s who may remember named flats – a couple I know of are The Lighthouse (Heriot Row) and The Jam Factory (Filleul Street).

Are any of these flat names familiar to you?

Do you remember the 1960s in Dunedin?