Illustration of Xanadu by Pattern Wilson (1898)

Back in the mid 1970s there was a flat called Xanadu at 3 Eden Street. The name was painted in an Asiatic typeface in black on the white front door. The flat adjoined a corner store run by the Verkerk family.

The origin of the flat’s name may be lost in the mists of time but is has been suggested it had its origins in the poem Khublah Khan written by Samuel Coleridge, in an opiate haze c.1797 [1].

Whether or not this is the case, the flat was certainly around too early to be named for the 1980 roller-opera starring Olivia Newton John, and the hit song of the same name written by Jeff Lynne.

Eden Street no longer exists but was only a couple of blocks from the main University campus to the west. The street was built over in the redevelopment of the intersection of Union and Eden Street when Otago Polytechnic was expanding. The flat would have been where H Block is currently situated.

The original location of Eden Street can still be seen in a map (below) from the DCC Rating Information Database.

The photographs below show the intersection of Union and Eden Streets with Verkerk’s store on the left and Xanadu adjoined, and the photograph of flatmates outside their named flat are taken in 1976.  Judy Fisher (third from the left), a resident of Xanadu from 1976-1977 remembers:

“We walked out of that door turned hard left and back  into the shop, where they made the most amazing bacon burgers  and chips … Mrs Verkerk always remembered us all  20+ years later, when she was in the new store ( which her son owns now).”[2]

The family shop, known as the  Campus Wonderful Store is still 138 Union St where it’s been feeding local students with pies, chips and grocery items for decades.[3] 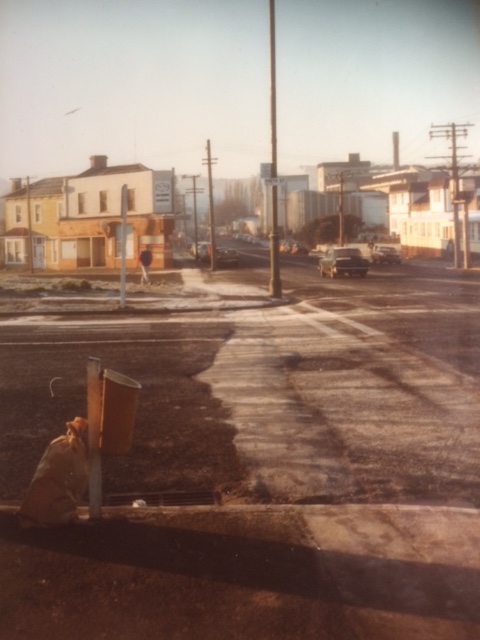 Photo taken from the intersection Forth and Union Sts looking towards the site of the flat Xanadu (yellow building) and the Verkerk’s store on the corner of Eden and Union Sts. Image source: Verkerk Family (via Judy Fisher)