It’s the fate of authors investigating and relaying stories from the past; details will be missed, stories will be untold and some facts may be incorrectly reported. So much of this kind of research relies on finding people, or being found. It relies on getting in touch with, or hearing the people that lived there at the time, or who knew someone (who knew someone) – but sometimes that just doesn’t happen at all, or in the case of Toad Hall, didn’t happen in time.

In September 2019, Jim Scott submitted reminiscences about his time at Toad Hall, a time that began in late 1958. The story of Toad Hall features on pages 54-59, 22 and 238 of Scarfie Flats of Dunedin and describes the beginnings of the flat in the 1960s. Many thanks Jim, for getting in touch and contributing to the story of Toad Hall. Scarfie Flats of Dunedin was a snapshot in time, its great to continue the story here, online.

John & George (he had a car!) were deputed to scout for a flat. They somehow secured the tenancy of 22 Pitt Street: rent payable immediately. The back story was that until recently it had been occupied by two sisters. One had died, and the distraught survivor kept her sister with her for several days. 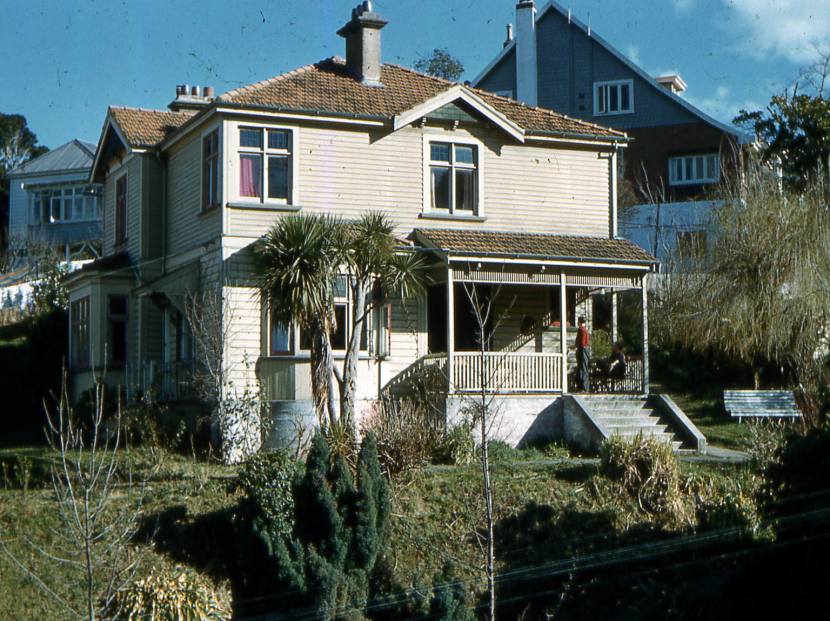 We were all 21 years old; from similar backgrounds; and knew each other well from our time together at College. Perhaps that is why we thought nothing of the fact that we would now be living in a grand old Edwardian mansion; north facing; with splendid views to the Otago Harbour; and only five minutes’ walk from Medical and Dental Schools. 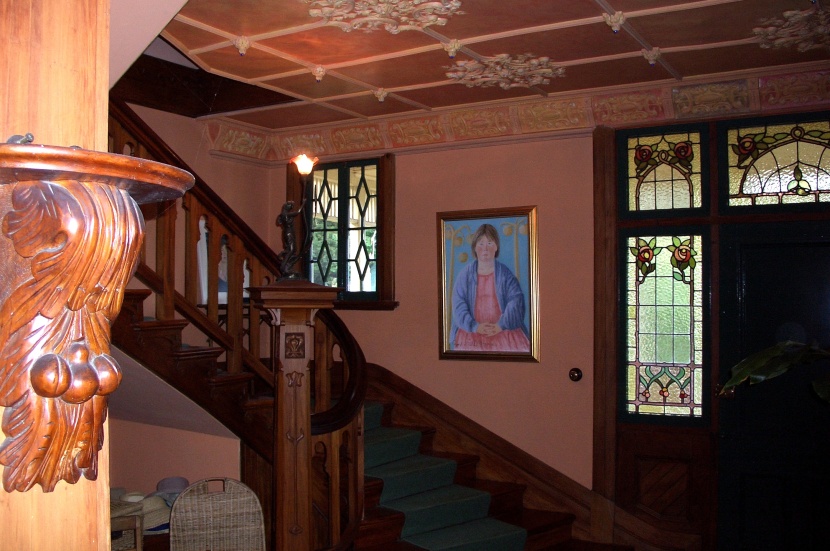 It had three large bedrooms, large sunny lounge, separate dining room, and ancillary staff and utility rooms. The bedrooms and lounge had minuscule fireplaces, so effectively there was no heating. The kitchen had a small 1920s free standing gas oven. In winter this was the warmest room in the house, and where clothes might be dried if you waited long enough.

Professor Bill Adams, Head of the Anatomy Department at the Medical School lived over the back fence. This encouraged circumspect behaviour than might otherwise have been lacking. Neighbours Mr & Mrs Laing were kind and tolerant, and a great help when we held dinner parties. 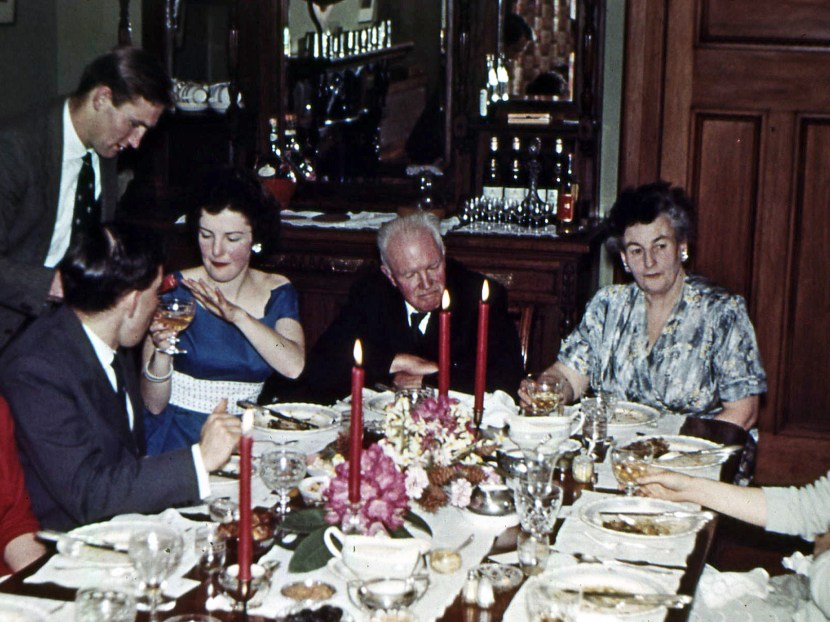 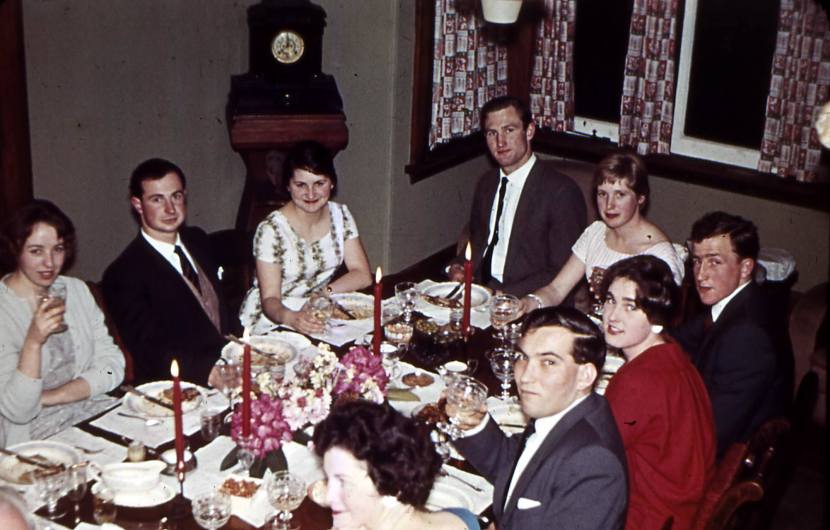 We began to call our house Toad Hall among ourselves, and the name spread around the student community. No signage was needed. We assumed the names of Kenneth Graham’s characters: Mole, Ratty, Badger, Toady, & Judge. Your name you depended on one’s perceived characteristics and known experiences.

We trickled into occupancy during January 1959. The house had been cleared of personal belongings, but some serious items of furniture remained: a large Victorian dining table & chairs with a handsome sideboard, large wardrobes, several aspidistras, pedestal with clock, kitchen table & chairs, and threadbare floor coverings. Beds, study tables etc came with us from Knox.

The “garden” was seriously overgrown. Not a problem, as the umbrella stand [!] held five Samurai swords of varying lengths. One fine day we took to the grass and bushes with these and ‘tidied’ the section. The Victorian wooden fireplace surround and mantelpiece in the front room was lavishly adorned with turned finials & knobs. A few quick swipes with a sword and resulted in a more modern aesthetic. I wonder now at the value of those furniture chattels, and shudder when I remember our vandalism.

Like most student flats, we were a crash pad for out of town visitors, many of whom had been at school with one or another of us. This was particularly so during major events, and inevitably led to parties such as that after the All Blacks-Lions First test on 18 July 1959.[1]

Members of both teams arrived. Around midnight a voice was heard confiding in an Irish brogue that, “she asked for something to remember me by, and all I could give her was a bebe”.

Those were the days when men were expected to dress in sports coat collar & tie for lectures, which were also held on Saturday mornings. Although the flat had a washing machine, it was easier to use the bag wash at the bottom of Pitt Street. One could last a month with a wardrobe of at least 30 pairs of socks, and a half dozen drip dry shirts. The washing machine was electively out of action for a month while we experimented with home brew in preparation for a ‘garden party’. The resulting ‘beer’ resisted containment in bottles, but when imbibed was pleasingly soporific.

At the end of 1960 we passed Toad Hall to the next intake. Although it may have passed into Selwynite occupancy, it appears that it went to good hands.

[1] Read more about students and the All Blacks-Lions First test in, ‘The Shambles’, Scarfie Flats of Dunedin, pp. x-x.

Where Scribes Bookshop is now, on the corner of Great King and St David Streets in Dunedin, there was once a notorious flat, called the Shambles. It was well known for it’s parties and as a location to go to continue drinking once the pubs had closed.

It’s not entirely clear from where the name of the flat originated: it may have been the shambolic nature of the place itself, or it may, as has been suggested by a former resident, been named for a place in Manchester of the same name.

Shambles is an old name and derives from Viking word Shamel apparently meaning ‘bench’, ‘booth’ or ‘shelf’ and the name is found in many places in the UK where there are market places.

The most famous example such a place is the Shambles in York which is allegedly mentioned in the Doomsday Book, one of the few streets that is. This would make it over 900 years old.

This is a quintessential medieval street with upper storeys of buildings stretching out across the street precariously towards each other. The street was once a flesh market (hence also being known as Flesshamel) – that is, a street of butchers. Livestock were slaughtered in the streets and it’s been suggested that it is this resulting mess that provides the word shambles with its contemporary definition. In fact the OED gives three definitions: 1) a mess or muddle, 2) a butcher’s slaughterhouse, 3) a scene of carnage.

Reports about the Shambles in Dunedin, of parties and exploding pans of golden dough boys from the 1950s and 60s, suggest the OEDs third definition may be most approprite for explaining the name of our Great King Street residence.